Getting back up to speed with Arduino

October 03, 2013
We have been working on devleoping a new lab space at North 51 recently with a view to trying out some new technology and messing about with different interaction ideas.

One little bit of kit I am very enthusiastic about is the Arduino. Most people I have worked with haven't had the opportunity to play with one so we bought one in and a load of electronic bits and bobs to play with.

On Tuesday evenings we now have a Geek night after work. The plan is to play with technology and just see what comes from it. This Tuesday was fairly quiet as it was a little late notice so me and my friend Jon decided to use it as a chance to get back up to speed with the Arduino.

We started with the blinking an LED (the most basic but always satisfying) and then moved onto blinking the LED at a pace determined by an LDR. 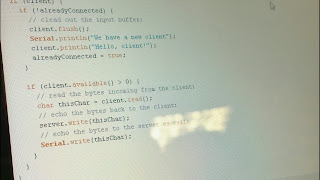 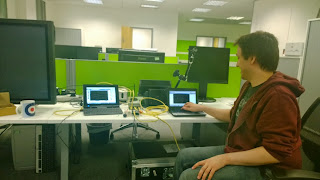 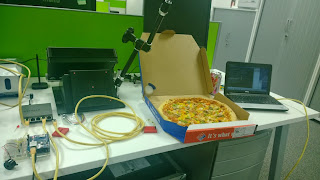 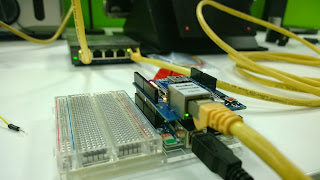 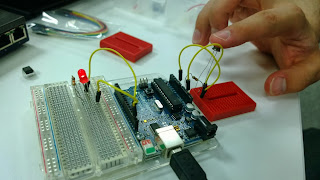 With that success we moved onto setting the Arduino up as a little server and plugging it into a switch. We then plugged laptops into the switch and were able to use the Arduino as a Chat server.

After that, we plugged in a little speaker and used the laptops to send commands to the Chat Server that played a different note based on the command. With this we then able to talk to each other on the chat server and agree a tune that we built up over two different computers. All in all very cool.

We have some more people coming next week and I hope we can build on this. After some pizza we had a brainstorming session and came up with some really cool projects that we are going to start messing about with. Next on our list is remote data collection using sensors and a GPRS shield / module for the Arduino!