May 10, 2010
Now I am all for users. In fact I am a user myself. However every now and again you come across one or ten of those fiendish knaves that just completely refuse to play the game. I won't go into an exact story because there is no need. We all have faced them. Those ill favoured folk that call you and make outrageous claims that they can not see an "ok" button on the screen they are looking at.

Ugh, obviously you must be patient with such types. But my biggest problem is the infectious foolery they cause. When one person says they can not get something working or it is going "slow". The other demented parrots start shouting the same and demanding to know what is wrong. It seems to be a culture thing where people feel good about not understanding how to use a computer. This has gone on for a good while now but computers are so engrained now, to take this attitude is utterly ludicrous. What I find even worse are those beastly folk that purport to be IT professionals and still can not even complete the most simple of tasks such as creating an appointment in Outlook.

I worked on a school open evening (looking for prospective A Level Computer Science Students) and there was a young lad looking to start in September. His mum was behind him and before he could even say "I want to make computer games" his mum had interceded on his behalf just to tell me that she hates computers, she doesn't know anything about them and she thinks we'd all be better off without them. I make a point of avoiding such fools normally but as her son was looking to get on to the course I felt obliged to respond. I suggested that the entire economy is underpinned by computer technology and therefore they are fairly important. She dismissed this with a pah! (She clearly believes still that magic is the predominant force that makes the countries economy go round, mmm then again..)

Anyway... I created this simple diagram, please feel free to print it off and put round the office. It should help most people find what they are looking for on the computer. 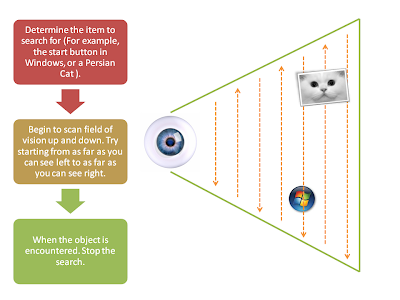