I would love to get into some real good home automation. I think the technology is there (or at least almost there) to make some really cool things now.

It would be great if there were microphones set throughout the house so you could just say "computer.. do this" or "computer.. dim lights.. set dinner party mood" or "computer activate house alarm for downstairs" when you go to bed. Windows Vista has some good voice recognition that is heavily underused. I have got some good results after giving it rigourous training. Of course it still occasionaly does some blunders but it is getting there. Like wise no use is made of the speech API really either. I think with these 2 combined you could do some very interesting things.

One place is in the kitchen. There are already usages of LCD television screens in kitchens ect.. but really these should be computers with voice recognition ect.. so that you can say to it, "Recipe for Lamb Rogan Josh Curry" for example. It might not get it right every time but you could use the touch screen to help. It could then give a tutorial video of how to cook it. You could say "pause" at the appropriate sections ect..
You could also leave notes for people when they come in the house. If you had an RFID tag on your key ring for example, the computer could identify it was you and read you back the note like "don't forget to wash the pots". Mmm actually that sounds like my hell!! I get enough of that without the use of technology!!! 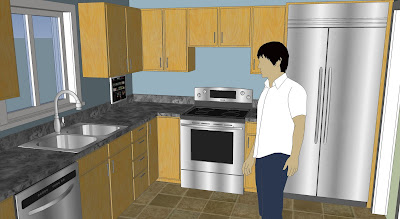 Ah I can just imagine now. I walk into the kitchen and the computer says
"Dominic, you have 14 messages.... "make sure you do the dishes, we are running
out of milk, please take the washing out of the machine and hang it up"

Seriously though, why aren't we doing things like this? The price is not the big prohibitor here is it really? When so much is already spent on houses. I suppose one worry is still the pace of technology.... mmm I need to look into this further. Of course you understand this is all inspired by the computer from the Enterprise in Next Generation.